The title is a play off of the movie “Yes, Virginia, There is a Santa Claus,” because for the last two years I’ve only had these amazing scallions in the summer and was stymied about how to make them last.

Then it dawned on me – freeze them for the winter! Yay! It’s like Christmas in August. So, instead of having my refrigerator overrun with two-foot scallions that go bad before I can use all of them, I have them for soups, stews, sauces and salsas in December.

(Just so you can wonder at the amazing size of these scallions, I placed them next to new kitchen twine and a 50 cent piece for scale.)

But, I was curious how they’d reheat. Would the texture be okay? Would they be watery? So, I decided to make a savory pancake with them – and use sriracha.

And since Jedd and I have been binging on “Top Chef,” I thought it might tickle him to be a “judge,” so he’d get to say things like, “flavor profile,” “texture” and espouse about seasoning.

His notes: “The sriracha gave it a good and spicy bite without being overpowering and the pancake was seasoned well. The texture was good, and it would be a pretty delicious post-bar dish. As easy to cook as scrambled eggs, but way better.”

Speaking of cool, let’s talk about freezing scallions. Don’t just wash them, dry them, chop them and place them in plastic bags. They’ll stick together, and you don’t want a 3-oz. scallion ice cube. So, just place them on a large, rimmed sheet pan, and divide the whites and greens. Then put them in separate freezer bags so you can easily take just what you need later. 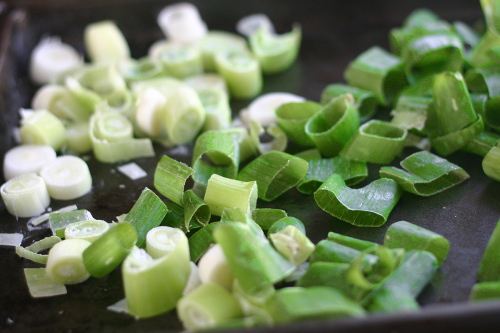 Now for the dish. I’ve made this a couple of times and I really like it. But this time I decided to make it garlicky as a little post-farmers market present for my husband. Saturday’s are a crazy long day for him. And it never hurts to be nice to the man who changes the cat litter.

Instructions:
Heat the olive oil in a non-stick frying pan over medium heat. Add the scallions and cook until wilted, about 1 ½ minutes.

In a medium bowl, whisk together the water, flour, sriracha, tamari and peanut oil. Pour over the scallions. Even out the batter with a spatula. Let cook for 3-4 minutes, or until browned. Flip and cook for an additional 3-4 minutes.

You can eat as a pancake, or cut into wedges and serve with a soy sauce, red pepper flake and rice wine dipping sauce.