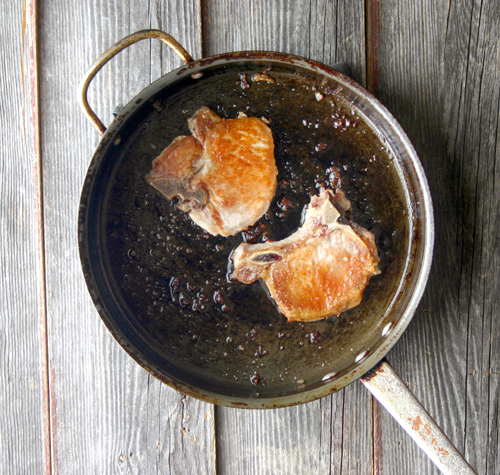 For the last week our living room window has been a derivation on this theme.

Whether it’s been snow or frost, we’ve been lucky if our view has been translucent at best.

And when it’s this cold outside I like to get something on the stove to warm us up a little. It’s good if it smells spicy too. So, to that end I’ve made this batch of super spicy barbecue sauce from homemade ketchup twice this week. 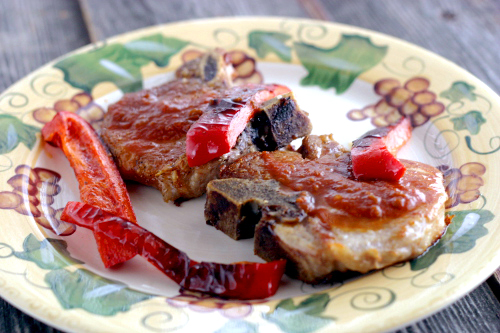 Even though it doesn’t defrost the windows, with the amount of vinegar in the sauce it smells like it could melt frost – in a good way. It’s wonderful with blackened red bell peppers too.

Instructions:
Combine all of the sauce ingredients in a medium saucepan and simmer over low heat for 20-25 minutes or until the sauce has reduced by half.

Heat a tablespoon and a half of the olive oil in a frying pan over medium heat until hot but not smoking. Add sea salt and black pepper to the oil. Drop the chops in and don’t move them. Let them sizzle and cook for about 5 minutes before flipping them. Cook for an additional 5 minutes or until the second side is golden brown. Check temperature with a meat thermometer to make sure that it registers at least 145 degrees. Cover with foil and let sit for 5 minutes. 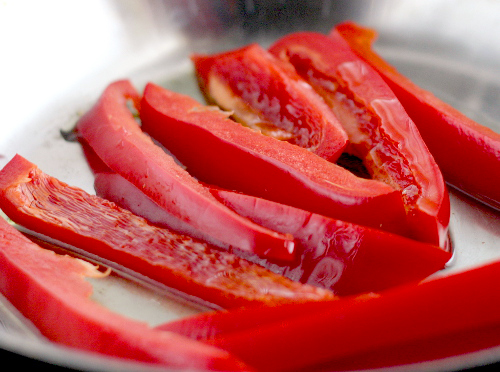 Slice the red pepper into strips. In a medium sauce pan, heat a tablespoon of olive oil until hot but not smoking. Drop the peppers in with sea salt and black peppers. Stir well to coat and leave the peppers alone for 5 minutes and then flip. Repeat if you want the other side blackened as well.

Top the pork and peppers with barbecue sauce.