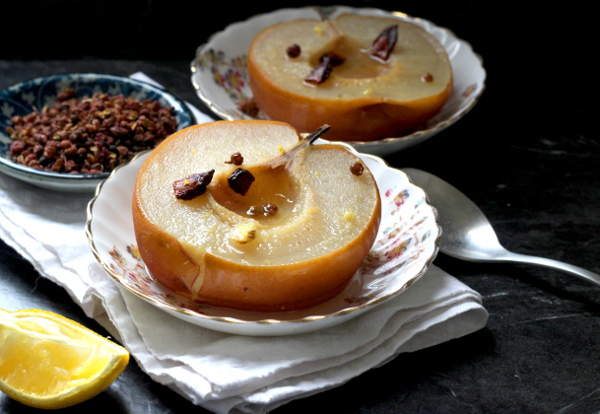 Are you looking for an insanely delicious treat? These pears fit the bill. They’re full of ginger and anise, with a titch of extra savory goodness from Sichuan peppercorns.

Jedd’s mother’s birthday was a couple of weeks ago, and I thought that braised pears would make a nice co-dessert with cake after a birthday feast in the apartment. In a quick change of plans however, we decided to go out to dinner instead. And what a dinner it was. So much good food, such a good bottle of wine, and such a decadent dessert!

So, my idea for the pears was scuttled into the background.

That is until we had another snow storm – again – this week. Yes. In April. I’m not going to whine, but let’s face it, we’re all a little over it.

I’m on a couple of deadlines this week, and as I settled in with notes to start laying out my first article on Monday, the snow caught my eye out of the window.

And immediately the apartment felt 10 degrees cooler. Brrr. I was making myself some tea to warm up when the pear caught my eye as I was putting the milk back in the fridge.

What would be more of a treat on a cold day than simmered pears with ginger, lemon, and warming spices?

Once these pears were done, and the spiced sugar syrup was ladled over them – they turned out to be the perfect thing on a cold winter day in spring.

In a large saucepan over medium heat, bring the water, mirin, and sugar to a light boil. When the sugar is dissolved, add the lemon juice, ginger, lemon zest, peppercorns, star anise, and pears to the pan.

Reduce heat to medium-low and cover the pan. Cook until the pears are fork tender, about 20 minutes.

Remove the pears with a slotted spoon and reserve.

Cook the syrup with the cover removed until it’s reduced and thickened slightly, about 15 minutes while stirring occasionally.

Note: These guys are wonderful both warm and at room temperature.