(Nobody was sitting, everyone wanted to stand in line for an autograph!)

There are a lot of food “personalities” that we love, but only one has ever gotten us out of the apartment (and kitchen) to drive the length of the state on a rainy day.

And that’s Lynne Rossetto Kasper of the Splendid Table. It takes a lot to inspire this kind of dedication in us.

I love the Splendid Table podcasts and have all of the shows from the last six years on a hard drive. Why? Because Kasper is the perfect combination of the women in my family, Julia Child (but with a more soothing voice) and a cool broad who you met in a pub and develop a friendship with over a couple of glasses of wine.

So, when I heard on VPR that Lynne Rossetto Kasper was going to be at their party to celebrate food and their new station opening up in Brattleboro, my husband, Jedd, and I promptly decided to go.

These pictures are a little further away than they needed to be. In hindsight I should have handed the camera to Jedd, who was a newspaper photographer/writer for years and who can actually – no joke – duck-walk like Chuck Berry to get close up to people he’s trying to photograph. He crouches, knees jutting out while he stays under people’s line of vision. It’s kind of an amazing thing to behold.

But, once we got to the VPR tent I just took off with the camera and ran toward the stage where VPR anchor, Jane Lindholm and Ms. Kasper were speaking. (A muscle memory that was not unlike the time I saw Duran Duran in the 1980s and rushed the stage.) However, this was a little bit more staid event, so I just cheered and photographed from the corner as opposed to yelling, “Save a Prayer!”

After the Q & A and a very fun “Stump the Cook” segment, Ms. Kasper had a book signing and autographed our copy of the book “How To Eat Weekends.” (Which she co-wrote with producer Sally Swift, and it’s fantastic.) Also, she was as nice in person as you would hope she’d be. And more. When we told her that we’d traveled from the Canadian border to the southern part of the state, she said, “Well, now I’m going to worry about you getting home safely!”

I swooned.
Jedd swooned.
And we made it home safely.

This recipe is my favorite from the book – so far. It’s Master Chicken and it doesn’t take long to make at all. While it was cooking, the apartment was filled with such a delicious aroma of star anise, ginger and soy sauce that I nearly mewed like a kitten. 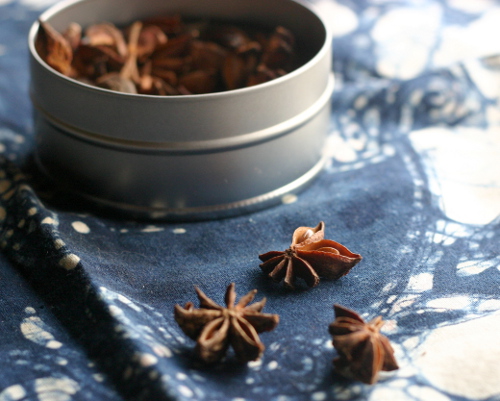 I made a couple of substitutions because of availability of ingredients (my local store was out of dark soy sauce) and things I had on hand.Which was four chicken breasts as opposed to a whole bird. I also made a second meal from the incredibly flavorful leftover chicken – egg rolls that were chock-a-block with good things from our CSA. Two for one, and both meals took less than an hour and a half to make, with one hour of hands-off cooking and there’s a dipping sauce, roasted Sichuan peppercorns and crunchy egg rolls to boot.

It doesn’t get better than that. 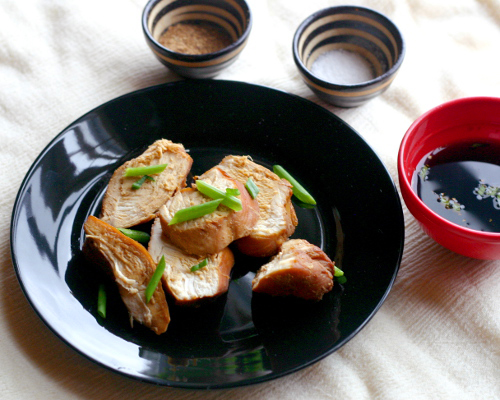 In a large saucepan bring the soy sauce, tamari, mirin, brown sugar, ginger, scallions and star anise to a gentle boil. Add the chicken, cover and reduce the heat to a simmer. Cook until the chicken reads 165° F with a meat thermometer in the thickest part of the breast.

Remove the chicken to a plate, let the sauce cool for a few minutes and pour the sauce through a strainer into a new bowl.

Stir all of the ingredients together and serve with the chicken and egg rolls.

Now, so far all of this sounds incredible, right? Well here’s the part of the recipe that blew my mind.

In a dry skillet on low heat gently toast the peppercorns, until they release their fragrance, which should take about 2 minutes. Let them cool for a few minutes and grind in a coffee/spice grinder. Pour the pepper into a small bowl and then heat the salt for about 3 minutes and pour into a separate bowl.

Season the chicken with the roasted pepper and salt before dipping in the Sichuan sauce.

Seriously, how cool is that?

In a medium bowl mix together the first seven ingredients and reserve. Pour a half inch of oil in a medium saucepan. Heat on medium low for 3 minutes. Because the oil is so shallow you can’t check it with a thermometer, so drop in a very small piece of a scallion green and if it immediately sizzles and bobs to the surface you’ll know that the oil is hot enough.

In the meantime, quickly wet the corners of an egg roll wrapper and put a quarter of the mixture diagonally across it. Bring the sides across and roll up from the bottom. Place the egg roll seam side down and repeat with the others. After about 1 ½ minutes the bottom should be golden brown. Flip to the other side.

(Photos by Launie and Jedd Kettler)