This is an inadvertently healthy (adjacent) dish. Sure it’s fried, but it’s shallow fried for about a minute. And it has as many vegetables as it does meat.

Also, it takes just a few minutes to cook because it’s a little blasphemous – it starts with cooked meat. I know, I know. The meat should be steamed in the dumplings and then fried. But I already had leftover meat in the fridge and my thought was, “Why not have dinner on the coffee table in less than 15 minutes?”

And it didn’t suffer for it. These guys are savory and crunchy, and the kale and lemongrass gives them a freshness that you don’t always get with dumplings. 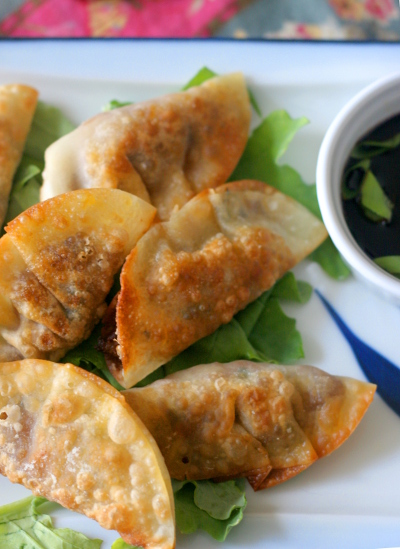 1 cup curly kale, stripped from the stalk and julienned

1 ½ teaspoons Mongolian Fire oil, or chili sauce/oil of your choice

Sauté the diced carrot and pepper in 2 teaspoons of olive oil in a large frying pan, over medium heat. Season with grated lemongrass and stir well. When the vegetables are softened, remove from heat.

Reserve the carrots and pepper in a bowl.

Add 2 teaspoons of olive oil to the pan, and sauté the kale until wilted.

Return the carrots and pepper to the pan along with the tamari, sesame oil, chili oil, cooked turkey, scallions and cilantro. Cook until warmed through, about 3 minutes.

Place the turkey mixture in a bowl.

Place a scant tablespoon of filling in the center of the wrapper.

Gently wet the wrapper around the outside edge with water. (That will make it adhere to itself.)

Fold the wrapper over in a half moon.

Wet the top of the round with a little water, and pleat the edge. Reserve. 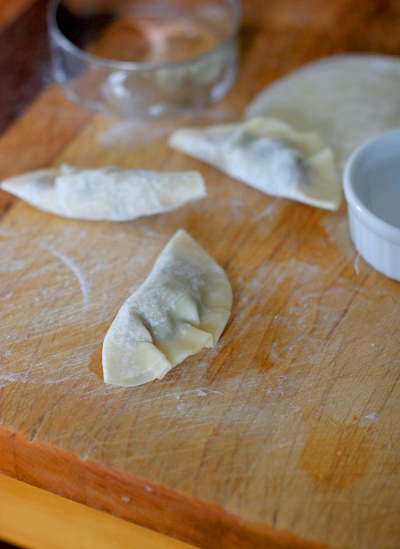 Assemble the rest of the dumplings.

If the oil bubbles when a tiny amount of flour is dropped into it, it’s ready for the dumplings.

Brown the dumplings on one side, about 30 seconds. Repeat with the other side.

Serve the dumplings with the sauce. 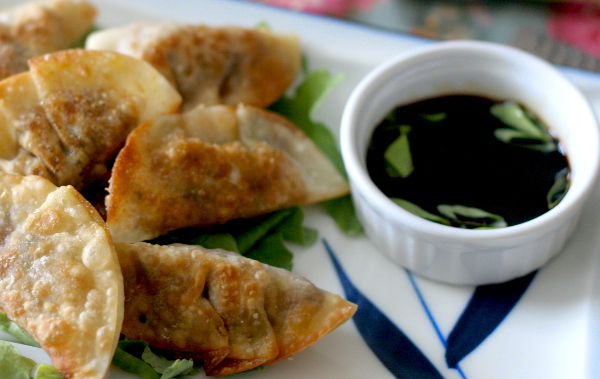