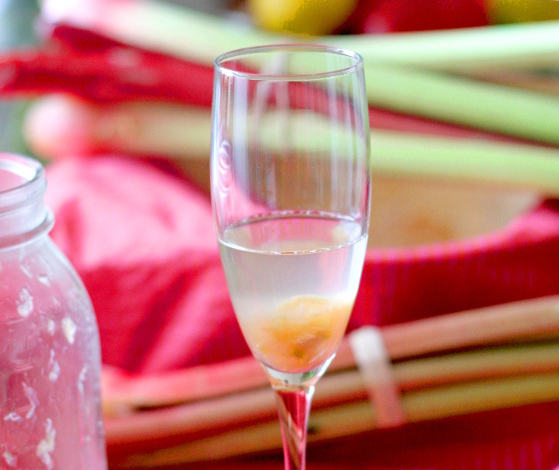 Wait, that’s not an old saying? I just made it up?

Along with rhubarb, which is taking over our crisper.

Last week I went to the farmers market, and got there at the tail end of the day. So, when I bought one bunch of rhubarb, my favorite fruit and vegetable purveyor gave me a second one for free.

How nice was that?

One bundle is set aside to make my mothers rhubarb crumble, which left me with one bundle to play with.

And because we were having a “thank you” party for all the people who helped us move several flights of stairs – I thought they deserved a special cocktail.

So I made a simple syrup with the rhubarb and threw champagne in the fridge to chill.

This drink was so delicious, that it made our toes curl.

If you have a few stalks of rhubarb, try this seasonal drink. Oh, and Jedd says to tell you that the rhubarb syrup is “fantastic” with vodka too.

Place the rhubarb, sugar and water in a medium saucepan. Bring to a gentle boil over medium heat, and reduce heat to a simmer. Stir occasionally. When the rhubarb has broken down after about 10 minutes, remove from heat.